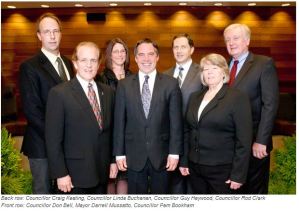 (Updated) Discussions around North Vancouver City Hall are INSPIRING! Mayor Darrell Mussatto and Coun. Linda Buchanan have been pressured to recuse themselves from voting on motions affecting big developers and unions that had funded their election wins. And on Nov. 4, Council adopted a motion that “strongly urges all candidates for election to Council to abstain from accepting donations from developers with projects or potential projects before Council or from labour unions that represent employees of the City.” For more on all that, see below. We hope that, without delay, friends of good government in EVERY municipality will advance a motion like the one by Councillor Guy Heywood (see actual text at bottom).

Now, from MetroVanWatch, here is a suggestion for every citizen in every municipality of the Metro Vancouver region — Write your favourite members of City Council, asking one specific request: Please provide a list of every development application you voted against, where the applicant had funded you or your civic party. (Be prepared — It may be a short list.) Or perhaps a good reporter in each town will do it. For more on this story …

Today, civic watchdog North Van City Voices published a story titled Campaign Contributions (Again), referring to projects coming to Council from developers Polygon and Fairborne. The story carries a fascinating excerpt of a longer article by a local columnist. It is so significant that we go to the original article now and share a few excerpts. We have underlined some parts that are most relevant to the whole Metro Vancouver region.

In this world of arithmetic-challenged senators and celebrity mayoral sinners, we should be proud of three North Shore politicians of exemplary character.

Mayor Darrell Mussatto and Coun. Linda Buchanan have been pressured to recuse themselves from voting on motions affecting big developers Pinnacle and Onni. Both – Onni through its parent company RPMG Holdings – donated $5,000 to the Mussatto and Buchanan 2011 election campaigns.

Suspicious? Don’t be. Said Mussatto: “… People think that there’s some sort of return favour implied, and that’s just not the case,” and asserted he’d voted against developers who contributed to his cause in earlier campaigns. “I think I’ve been very principled.”

Keating declared: “The implication here of course. .. is that votes at this council table are for sale by campaign donations and that, quite frankly, is incorrect.”

The third councillor, Buchanan, sat silent – maybe because the dastardly insinuation was unworthy of response? All three voted against the motion, moved by Coun. Guy Heywood.

Well, let me heap praise on these nobly principled politicians. Because, you see, I’m a sinner. And I know it. My heart is wicked. I have never been offered a bribe. But I am certain I can be bought. It just hasn’t been offered. Clearly nobody thinks I have anything worth buying.

So I haven’t been tested. I have no doubt, though, that if the price were right, I could be corrupted. If, say, the Bank of Horsefly gave me a $5,000 grant to write a series on reasons for the 2008-10 recession, I might avoid implicating the Bank of Horsefly. Friends? I’d favour ’em. If I had the power. Give them the best seats in the house. Enemies? I’d punish ’em. The three North Van city councillors are about such human frailty.

RELATED – Readers may get some extra ideas for action from CityHallWatch – Six Actions to Clean Up Vancouver Politics. The public may wish to demand these six fixes in EVERY municipality, as well as at the Metro Vancouver level.

The six items are:

See also these efforts for election finance reform at the B.C. Provincial level:

Note that the Provincial government plans to introduce legislative changes in early 2014. Many of the proposed changes are actually counterproductive. One dangerous idea is a shift to four-year civic elections (from the current three), possibly effective in 2014. This is one idea to really raise the alarm bells for. Until true, profound reforms are instituted, switching to four years could be a serious problem, giving incumbent majorities even more time to become entrenched.

Reduce, recuse, North Shore News, November 13, 2013. Excerpt: City of North Vancouver Coun. Guy Heywood moved a symbolic but ambitious motion in council last week calling for an end to developer and union campaign donations in local elections. It’s not a surprise at all that those who benefit most from union and developer contributions on this council voted against the motion – though that does not mean they’ve been bought.
http://www.nsnews.com/opinion/columnists/reduce-recuse-1.694741

Here is the text of the motion adopted by North Vancouver City Council, on November 4, 2013. Click here for meeting minutes, text of motions, and links to video clips.

WHEREAS the Provincial Government’s recent effort to reform local
government elections did not deal with the source of election campaign funds;

AND WHEREAS the appearance of a conflict of interest is created when
developers and unions that make significant contributions to election
campaigns of candidates for Council also have matters that come before
Council and that whether or not these conflicts are permitted in law, they harm
the reputation of Council and impair the legitimacy of its decisions;

BE IT RESOLVED THAT while this resolution does not have the force of law,
the City of North Vancouver strongly urges all candidates for election to Council
to abstain from accepting donations from developers with projects or potential
projects before Council or from labour unions that represent employees of the
City; and

BE IT FURTHER RESOLVED THAT a copy of this resolution be forwarded to
the other Metro Vancouver municipalities, UBCM and the Provincial Ministry of
Community, Sport and Cultural Development.