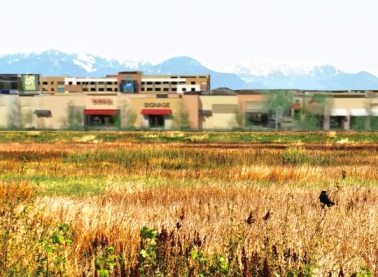 Artist concept of developers-simulated mall on viewscape. Note: Reality will be better in some ways and worse in others.

Did you know? “First Richmond North Shopping Centres (SmartCentres)” has applied for a large Walmart store development in Richmond, and the public hearing is tonight. The proposal has set off a firestorm seen in other cases everywhere.

Read the Garden City Conservation Society blog. Below are references about the application and hearing, plus corporate information, and media links.

1
Friends of Garden City,
Reminder: Walmart mall public hearing, Monday, Nov. 18, Richmond City Hall, 7 pm.
Win-win: The Walmart mall public hearing on Monday evening is the last chance for a win-win outcome instead of a lose-lose one for natural legacies, citizens and the applicants. The Garden City Conservation Society does all it can to reach out to all the main players, and I will review our efforts when I speak at the public hearing.
Videos! Some Friends of Garden City have worked hard to create Walmart mall videos on YouTube. The descriptive text with each is important. Visit their channel, “Rabbit Run Studio,” and share what you like ASAP via social media such as Facebook and Twitter. Also keep coming back, since more videos will be added.
Odds: There can be a good result if council sees enough concerned citizens and hears many respectful reasons why citizens oppose the rezoning (from single detached residential) for the Walmart mall. Even if one could live with an adapted mall, as I could, one would want the application defeated so that any adapted version would require another public hearing.* It would be easy to surrender, but citizen courage succeeded against greater odds to keep the Garden City Lands in the ALR. In any case, the community will be better for it, and a good showing has the near-certain side-benefit that the people will be listened to better in future.
Suggestions and tips:
1. At city hall, enter at the north door (parking lot side).
2. At the council chambers door, notice whether there’s a speaker’s list to sign.
3. If there’s a big turnout, look for ways to enable everyone to get in. Also, be aware that seating will open up when people leave after earlier hearings.
4. After the mayor complains about clapping, find non-verbal ways to show support. (Simply waving worked well at the GMO meeting a few months ago.)
5. Prepare speaking notes even if you’re not sure you’ll speak.
6. While being incisive, we aim to be respectful when speaking and listening.
7. For written submissions by email, there is an online form (but the usual mayorandcouncillors@richmond.ca should be okay too).
8. The agenda identifies 19 submissions received between first reading of the rezoning and Friday afternoon. Excellent start. If yours is missing, you are probably one of the many who wrote before that time period. Please write again..
9. Submissions should indicate city of residence and preferably full address. If you live beyond Richmond, still send a submission and indicate your location. Note: One doesn’t have to be a Richmond resident to submit.
10. Be there before 7 pm if you can, but come whenever you can if need be. Be ready for a long evening. (It’s safe to say that, in part, the delay before the public can speak is a tactic to limit opposition, but it’s only a deterrent if we let it be.)
11. One benefit of having to wait for other public hearings is to learn from them.
12. Please review the tips in “Girding for the ‘Walmart City’ public hearing.”
2
Density: A while ago, I credited the developers, SmartCentres, in the Richmond Review for insisting on moderate mall density. Be conscious, though, that: What they want is in keeping with their preferred mall design, not a gift. The monster design (shown in the Richmond News) that they said they could have used would have been more likely to be rejected. Viewscape/habitat destruction isn’t okay just because the harm could be worse. The street trees in the mall view with the Digging Deep column in Friday’s Richmond Review wouldn’t be adequate, even though the developers have made an artistic effort to improve appearances.
Alternative mall location: The Alexandra neighbourhood does not need to be dependent on the Walmart developer, SmartCentres, for a mall. North of Alexandra Road along Garden City Road, there is lots of space that is shown as commercial in the West Cambie Area Plan but currently not needed a long time. It could be a good alternative location for an Alexandra Neighbourhood mall.
Sending your input: The city website has directions at “About public hearings.”
*Note: B.C.’s Local Government Act includes “Procedure after a public hearing.” Instead of adopting or defeating the rezoning, council can require changes and then adopt it without a further public hearing. However, the citizens would want one in that situation, and they can only be sure of getting it if the application is defeated before perhaps being fixed and brought back for approval.
Reminder: Garden City Lands survey
Please respond to the survey/questionnaire related to the Nov. 7 open house about three similar concepts for the Lands. All include non-ALR uses and other major problems that disqualify them from perspectives of respect for the ALR and genuine conservation. Read “Making the best of the GCL survey.” The article links you to the online survey and Let’s Talk Richmond. You may prefer a different concept such as “Option E: Perimeter trail concept,” as described in the recent “tips sheet,” and the article includes a work-around for indicating that. Even if you did the paper questionnaire at the open house, you can also do the online survey, bringing in your new insights. Each person who signs up with Let’s Talk Richmond can respond. Also, one can mail in the paper questionnaire, available for download in Chinese and in English.
Reminder: GMO OMG film
GMO OMG, free at SOS Eco-Centre at 7 p.m., Sunday, Nov. 17. No charge. Enter from Shell Road at the southwest corner of Shell and Steveston Highway. Details here.